Malaysian Doshin Rubber Products (M) SDN. BHD. commissioned a company to develop a 2400-ton rubber bearing compression-shear test system called e-lab 200. After finishing the mainframe, 2,400 tons of vertically loaded actuator and hydraulic power station, the contract was terminated. Because the supplier did not complete a test which can meet the accuracy requirements of Japanese rubber bearings buyers on a similar small load compression shear test system of Doshin.
When visiting the National University of Singapore, Doshin’s engineer saw the perfect performance of the 2000-ton two-way structural test system manufactured by Popwil for the National University of Singapore. So they offered a new contract to Popwil to complete the project of e-lab 200 manufacturing. The time of delivery is three months. Deadline is April 20th. It is the final completion date of the inspection report of rubber bearings purchased by Doshin’s Japanese customer.
According to the status of the e-lab 200 and the test requirements, the engineers from Popwil designed an electro-hydraulic-servo controlled system to accomplish the project. This system includes an accumulator station, a hydraulic control valve group, a set of pipeline, an auxiliary oil tank, a hydraulic distributor, a dual-channel IPC controller and software. The most important part of the new system is two exchangeable actuators with ± 1200mm ram stroke but different loading ability. One is 50 ton, the other is 250 ton. The debugging was completed just before April 20 which is the deadline specified by Doshin’s Japanese customer, and the test was completed perfectly, helping Doshin keeping this customer.
The e-lab 200 when Popwil took over is shown as bellow. 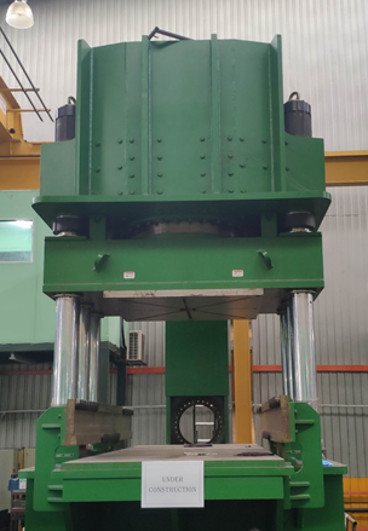 Photo of e-lab 200 when Popwil took over

After finishing the manufacture, inspection and test of the added hydraulic parts, the controller and software in China, Popwil engineers went to Doshin in Malaysia. In just 20 days, Popwil engineers finished the installation and debugging of the vertical displacement measuring unit, the horizontal actuator, the accumulator group, the hydraulic distributor, the control valve group, the auxiliary oil tank and associated pipeline, the control electric cabinet, the IPC controller and application software. The specimen test was perfectly finished just before April 20th, the deadline specified by the Japanese customer. The scene photos of the completed e-lab 200 are as follows: 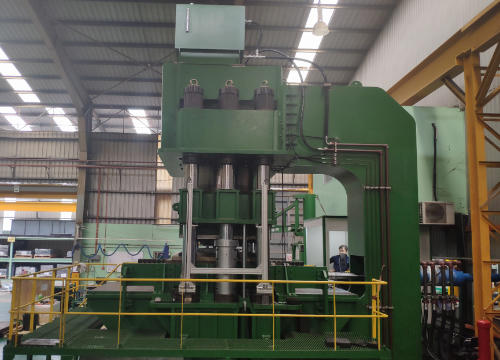 E-lab 200 side photo after completion 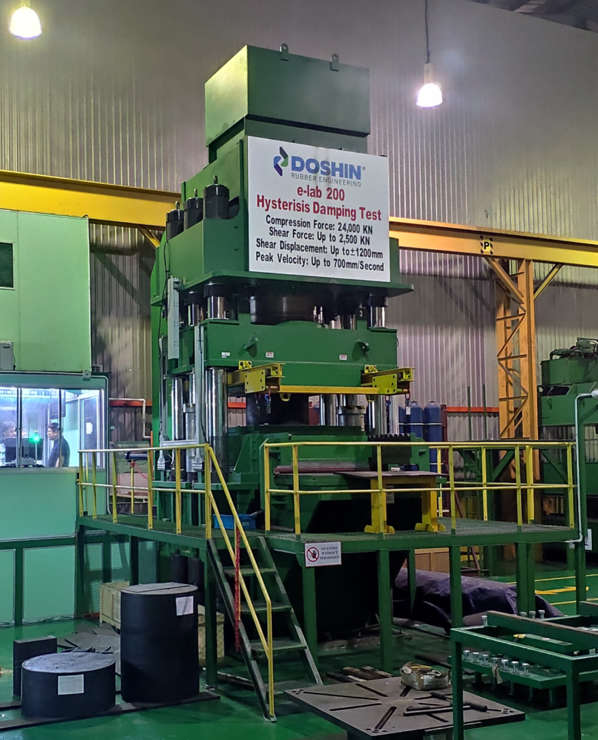 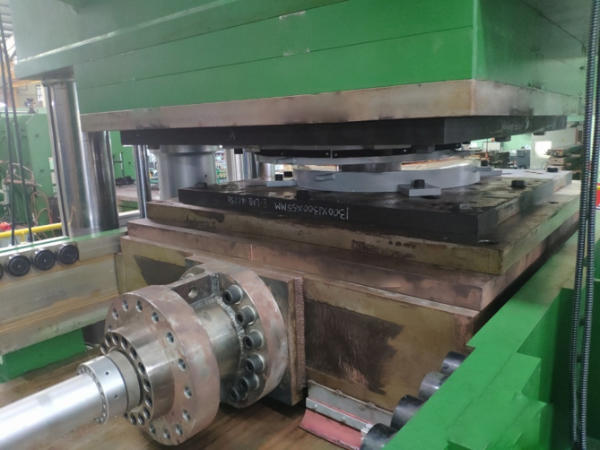 Undergoing compression and shear tests on rubber bearings after completion

Doshin was satisfied with the work of Popwil about the project of the e-lab 200. There was no problem after nearly a year of use. The stability and reliability of the equipment are far exceeded the Level that of other Doshin’s compression and shear testing machine. Therefore, Popwil was offered the second contract by Doshin in which required the use of Popwil control systems and software to upgrade their existing 5,000-ton rubber bearing compression-shear test system e-lab 150.
This machine had a PLC controller, one Rexroth’s non-standard hydraulic station, a 5000 ton vertical load actuator with 300mm piston stroke, and a 500 ton horizontal load actuator with 2000mm piston stroke. Doshin required the upgraded e-lab 150 should have the same system reliability and test accuracy with the e-lab 200 after upgrading.
The project started in October 2019. The installation and commissioning began in January 2020. All work was completed before the February 2020.
The following pictures are the scene photos of e-lab 150: 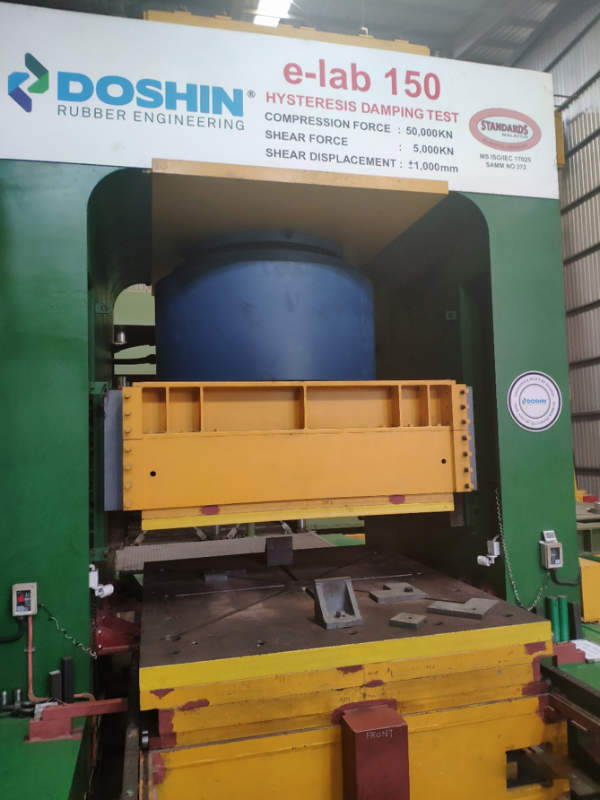 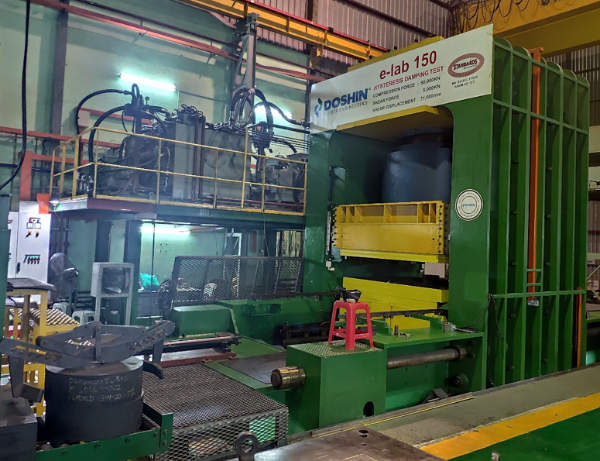 Photo of e-lab 150 after retrofit 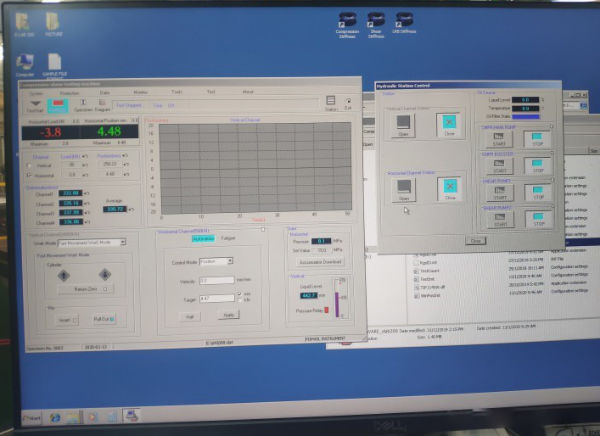 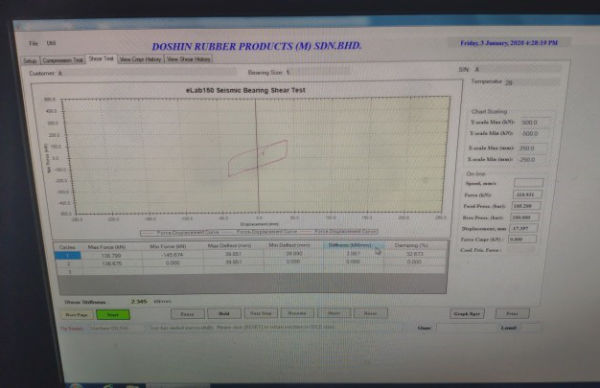 Popwil joined together with The College of Information science and Electronic Engineering of Zhejiang University to invest six million to build a new public experimental platform, named Interdisciplinary Motion Dynamics Simulation Platform, and focused on R&D in the area of Multi-degree-of-freedom seismic and space attitude simulation and control.
The new laboratory is located in the beautiful Haining campus of Zhejiang University, and has floor area of 500 square meters. The laboratory will build a high response 6 degrees of freedom Stewart platform based on a 5G network-based integrated data acquisition system. The platform is also equipped with silent hydraulic power system and other related equipment. The short-term goal of the laboratory is to develop a new generation of ultra-high-speed POP-M controllers with closed-loop control frequency exceeding 4 kHz with new network-based control software. The middle term goal is to do R&D on associated technology and products in civil engineering test and quality control, motor vehicle road simulating and seismic simulating platform, space or sea state motion and attitude simulating platform, and other related fields. 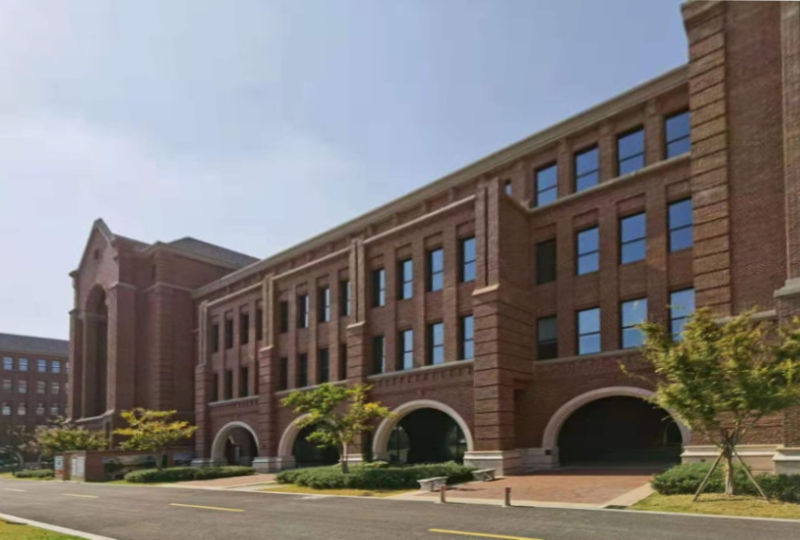 Appearance of the completed laboratory 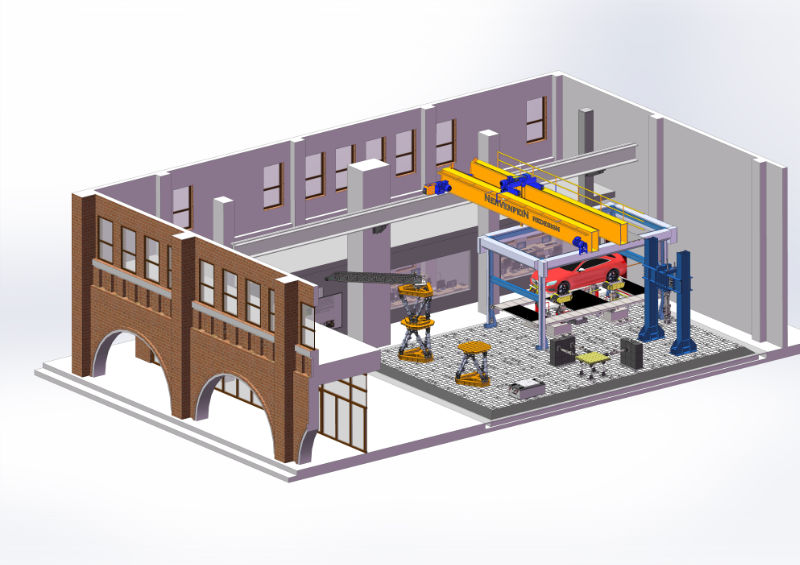 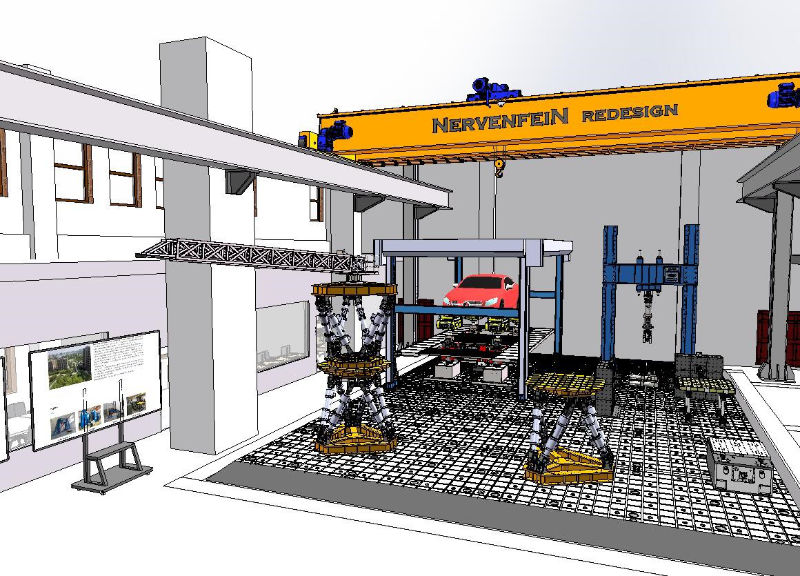 On October 9, 2019, Popwil signed a contract with the Hong Kong Polytechnic University to develop a 2500-ton large-scale structural pressure testing machine for the compression performance test of high-strength structural columns based on the space size of the structural laboratory of the Hong Kong Polytechnic University. The maximum vertical test pressure of the machine is 25000kN. The computer electro-hydraulic servo control system automatically controls the loading process. The test data can be output to the data acquisition system in digital or analog type. External dimensions of the test machine: 4920 × 3400 × 2345, the maximum test space: 2000 × 1800 × 1500mm. The design scheme of the aircraft is as follows: 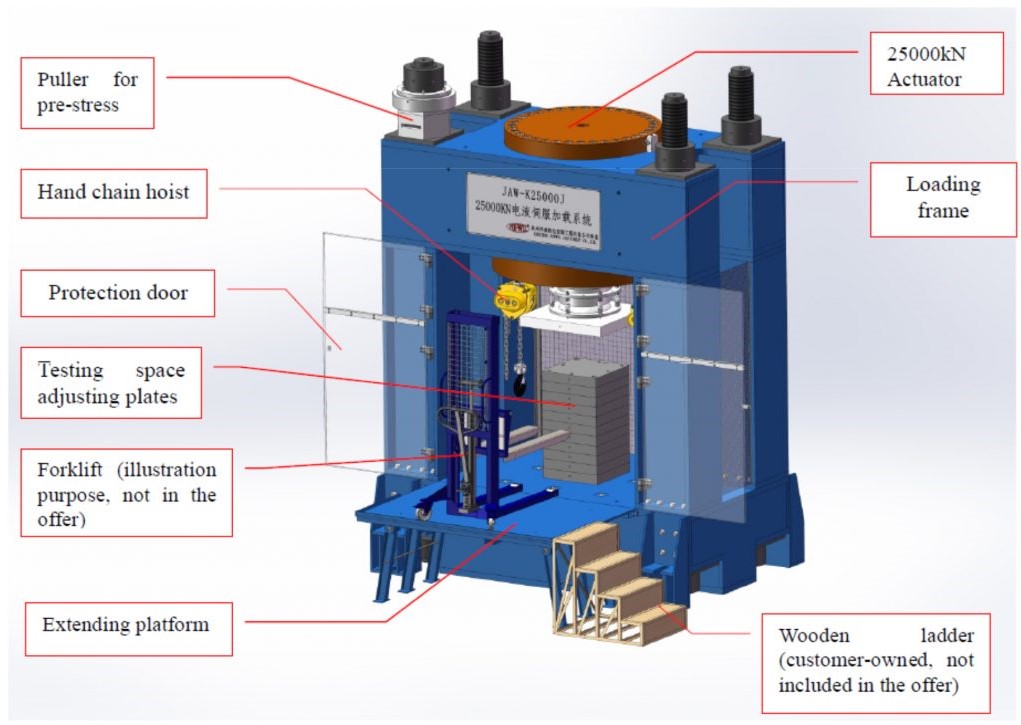 The signing of the contract indicates that the users of Hong Kong Polytechnic University not only recognized the quality of Popwil products, but also affirmed the professional services of Popwil. We will, as always, work hard to provide Hong Kong Polytechnic University and other users with a series of services from testing equipment consulting, laboratory construction planning to testing equipment research and development, testing aid design and production, and testing equipment maintenance and upgrading to achieve a win-win cooperation. purpose.

After the dual six DOF platform designed and manufactured by Popwil was officially accepted by the Ocean College of Zhejiang University in September 2019, Popwil has signed a new joined research and development contract with a marine engineering company to design and manufacture a heavy duty six degree of freedom sea state simulating platform.
The heavy-duty 6-DOF swing platform is designed to testing other 6-DOF swing platforms which will be installed on the offshore wind power operation and maintenance ships which can work under 5 grade sea situation. After test, qualified platform will be installed on the ship to balance the affection of the sea wave and build a bridge from the ship to the offshore wind power tower or other offshore platform. The function of the bridge is to transfer people and goods with a six-degree-of-freedom wave compensation function. It is widely used in offshore wind power, offshore oil prospecting and military-civilian integration docking and rescue operations.

After nearly half a year of hard work, the installation and commissioning of the dual six-degree-of-freedom simulation platform developed by Popwil for the Ocean University of Zhejiang University was completed and successfully passed the acceptance of the expert group. The application test research in the sea state environment provides the guarantee on the equipment.

The equipment is introduced as follows: 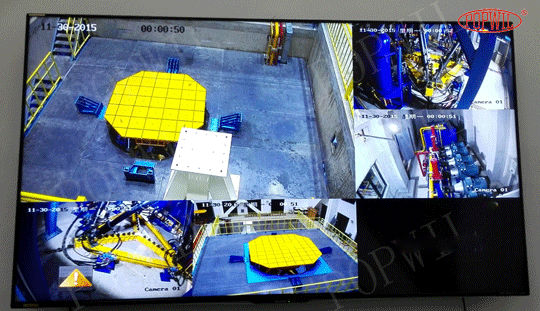